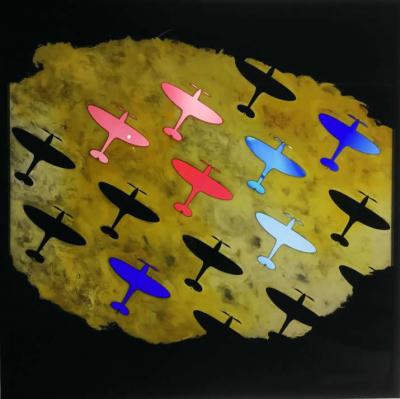 Spitfires - 2019.2
A stunning new 21st century acquisition, Spitfires has been gifted by internationally-renowned artist Brian Clarke to celebrate the museum's 40th anniversary of opening to the public.
The Stained Glass Museum is delighted to announce the recent acquisition of Spitfires (2017), an autonomous stained glass panel by leading British artist Brian Clarke (b. 1953). The printed and hand-painted artwork has been generously gifted to the museum by the artist to mark the Museum’s 40th birthday, celebrated earlier this year. The panel has been placed on display in the entrance to the Stained Glass Museum in time for annual commemorations marking the Battle of Britain .

The Spitfire is the most iconic and recognisable British aircraft associated with World War II. Its superior speed and agility gave the RAF a critical edge over the Luftwaffe during a number of crucial battles, including the Battle of Britain.

For innovative artist Brian Clarke the distinctive form of the Spitfire has provided the inspiration for a number of artworks on paper, canvas and in architectural and autonomous glass works since 2010, treating the shape as an heraldic emblem like the medieval fleur-de-lis. Spitfires is one of a series of seventy unique panels made by Clarke – the first autonomous works in stained glass to combine the techniques of water-jet-cutting, ceramic glaze-printing and lamination – each showing the aircraft in the same formation, but with different Spitfires illuminated in glorious colour.

In the ceramic glaze-printed cloud – a digital reproduction of one of Clarke’s oil paintings – the silhouettes of 16 Spitfires can be seen. The seven coloured Spitfires, in various tones of pink and blue, have been cut from sheets of coloured antique (mouth-blown) glass.

Spitfires is one of the first 21st century works to be acquired by The Stained Glass Museum, whose collection spans from medieval to the modern period. 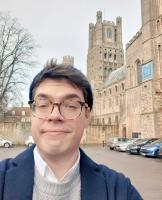 A copper foiling workshop with the artist Claire Hart

From our base in the historic town of Royal Tunbridge Wells, on the edge of High Weald, the 2020 Study Weekend will explore West Kent.