Over the years The Stained Glass Museum in co-operation with commissioned artists has been involved in a number of collaborative community art projects. Several projects have seen glass artists, the museum team and school pupils co-create windows for schools, church and community centres. Here is a selection of some of these window projects with brief information about the artists and communities that designed and made them. 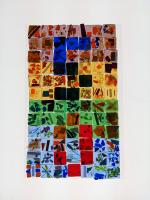 St Mary’s School celebrated their 50th anniversary in 2022, and to commemorate this Headteacher Rachel Clarke and the Friends of Ely St Marys commissioned some glass artwork for the school foyer, to sit alongside some glass made in 2006-2007. All Year 3 pupils at St Mary’s School visited The Stained Glass Museum to learn how stained glass is made. During their visit, under the guidance of artist Jill Fordham each child created a small square of fused glass working in warm or cool colours. The square pieces were then assembled to form the number ’50’. The fused glass artwork was presented to the school by Director and Curator of the museum Jasmine Allen at their end of term service in Ely Cathedral in July 2022. 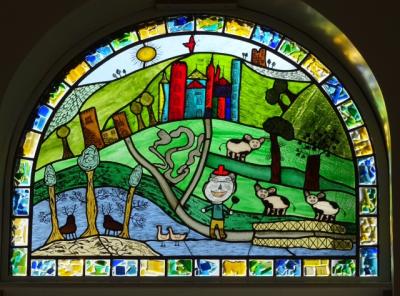 This window was made as part of the ‘Fenstanton CB300’ project to commemorate the 300th anniversary of the birth of Lancelot ‘Capability’ Brown and brought the life and works of this 18th century landscape gardener, who transformed the English countryside, to a new generation.

In the course of the project, thirty-six excited six-year-olds from Fenstanton and Hilton Primary School walked the National Trust Wimpole estate to view Brown’s signature landscape features. Many of these features were sketched by the children, and the children’s sketches together with a landscape colouring competition at the school gave inspiration for the design of this window, which includes trees, winding paths, a bridge and various wildlife including cows and ducks. 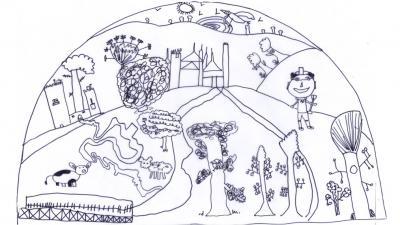 With the help of their teacher Marion Barber, pupils selected elements from their landscape sketches and produced a design for a stained glass memorial window, which was then worked up in traditional painted and leaded glass by artist Sarah Hunt. Year 2 children also visited the workshop at the Stained Glass Museum and learned about the ancient art of glass-making from Theophilus, a 12C monk. Each child then worked with stained glass artist Sarah Hunt to learn how to cut glass and created an individual fused glass tile. These fused tiles were incorporated into the window’s design, forming the border.
The result is a colourful, original and eye-catching work that will engage current and future generations of schoolchildren, villagers and visitors to Fenstanton for many years to come. The window was dedicated by David Thomson, Bishop of Huntingdon on 28 August 2016, and unveiled at Fenstanton Church Centre on 3 September 2016 by Gilly Drummond, Vice-President for Life of The Gardens Trust and chair of the Capability Brown Festival 2016.

The Fenstanton CB300 project was conceived by Judith Christie, research coordinator for Cambridgeshire Gardens Trust and a Friend of The Stained Glass Museum. It was part-funded by the audience development strand of the Capability Brown Festival, managed by the Landscape Institute and funded by the Heritage Lottery Fund. Jill Donnelly secured match funding from the Huntingdon Area and National levels of NADFAS. 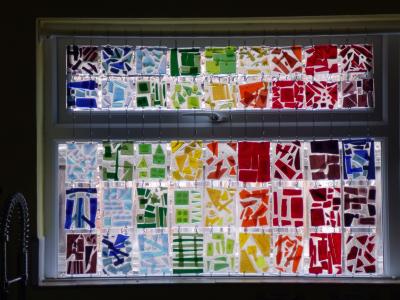 This window installation involved Year 6 pupils at Leverington Primary School in Norfolk creating a series of fused glass tiles during a visit to The Stained Glass Museum. The art specialist in this school, Rachel Ashby, wanted a rainbow of colours to fit an existing modern (plastic) window, so these tiles were arranged by artist Sarah Hunt and linked together to create a colourful hanging glass installation that was fixed in front of existing UPVC windows to brighten up the classroom. 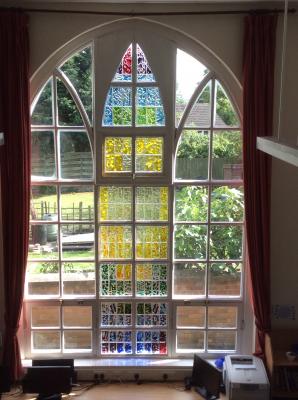 The central parts of this large three-light gothic window in a large Victorian hall at Little Thetford School are filled with brightly coloured pieces of fused glass artwork. As conceived by the then Headteacher, Rob Litten, it was intended that all children in the school would contribute to this window.

As a Church school we thought that an abstract design with a spiritual theme would be a good idea. Artist Sarah Hunt was much inspired by the windows designed and made by John Piper and Patrick Reyntiens and thought that a window inspired by the brightly-coloured ‘burst of light’ baptistry window at Coventry Cathedral would be perfect. The colourful window could be interpreted by children and adults in their own ways.

All of the children in the school, except the reception class, visited the Stained Glass Museum where they were introduced to the history, art and science of stained glass by Theophilus the Monk. Having explored the Museum’s gallery each child then learnt how to cut glass under the tuition of Sarah Hunt. Each pupil then made a piece of fused glass, which they cut and arranged.

The overall design for the window, featuring a burst of yellow light at the centre with gradating colours of the rainbow around, was made by Sarah Hunt. The central light of the window is now completed and it is hoped that the two side panels will follow in the future.

This colourful story window is based on the story of Rapunzel. It was made for the library of the Norman C. of E. Primary School in Northwold, Norfolk. After a visit to the Stained Glass Museum, the children made a design for the window based on the story of Rapunzel at school with their teacher. The figure of Rapunzel with long flowing golden hair can be seen on the right within a tall tower, whilst the prince and his horse are shown in the foreground. The design was adapted, interpreted and executed by artist Sarah Hunt using traditional glass painting, and assembled using lead and copper foil techniques. 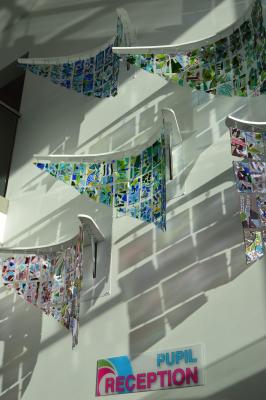 This project involved the creation of a unique glass artwork for a new purpose-built secondary school which opened in the new town of Cambourne in September 2013. The School’s first year-7 intake (a total of 144 pupils) were all involved in the creation of the artwork, which is made of fused glass in the school colours green, blue, pink and purple and hangs in the entrance foyer of the new school building.

The students visited The Stained Glass Museum to learn about traditional stained glass techniques with the Museum’s Education Officer Sally Austin and local artist Sarah Hunt. Sarah was responsible for preparing the glass and teaching the children to design and cut glass and assemble their designs. Mark Yeates, Head of Art at Cambourne Village College, then fused the glass in the new school kiln and linked the pieces together with loop chains to form six curved triangular ‘sails’, each of which contain 24 pieces of fused glass.

The coloured glass installation was completed in time for a visit by the Duke of Gloucester, grandson of George V and a first cousin of the Queen, to Cambourne Village College on 17 September 2014. 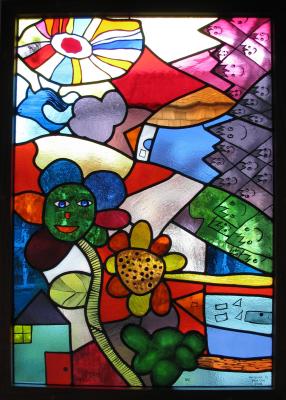 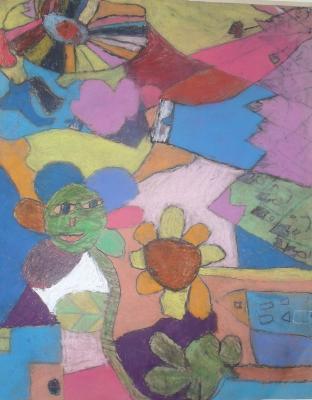 Two stained glass windows, made using traditional techniques of glass painting and leading were made for Willingham Primary School in 2008. With the help of their teacher Year 1 pupils came up with colourful and cheerful designs which were expertly translated into glass by stained glass artist and former teacher Sarah Hunt. 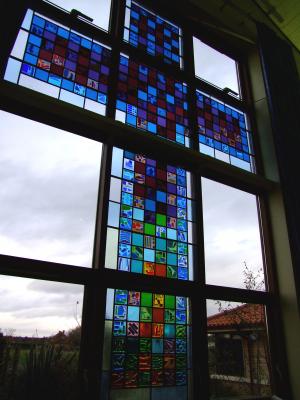 One of the largest window projects The Stained Glass Museum has been involved in was a 5m high window for St Martin’s primary school at Shouldham, Norfolk. The school’s head, Marika Mears and the Museum’s Education Officer Sally Austin, were very keen that every child in the school, all 150 of them, and every member of staff, should be involved with the project to make a window for the school hall.

Over the course of two weeks the children visited The Stained Glass Museum to learn something of the meaning of the beautiful art form of stained glass. They also learned how to cut coloured glass and to create their own glass tile for the window. The whole design was brought together by glass artist Althea Braithwaite before being fired and assembled into a beautiful cross formation for the school assembly hall. The window was unveiled and blessed by the Bishop with a sprig of rosemary and holy water in a service in late November 2008. 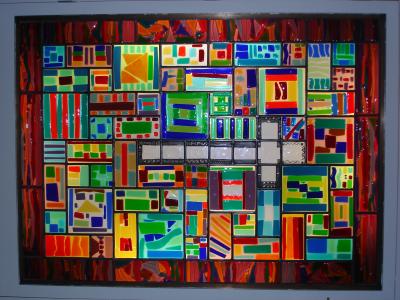 ‘The excitement at the prospect of learning to cut glass is evident on the children’s faces when they arrive and their sense of achievement having done so is very gratifying.’
Susan Mathews (Former Curator of The Stained Glass Museum, 2007).

Althea Braithwaite, probably better known as writer of Desmond the Dinosaur and many other children’s books, worked with 90 pupils from St Mary’s C of E Primary School in Ely, to make their own stained glass window, which was installed in the foyer of their school.
This project was instigated by teachers at the school and the idea came out of a whole-school Vision Day. The children, all aged between 7 and 9, worked together with Althea in small groups in the Museum Workshop to produce individual panels of fused and coloured glass. Having discussed their ideas with Althea and their teachers the children spent time designing their own squares on paper.

Following a master design by Althea, each child learned how to cut glass and turn their design into a patchwork of colourful kiln-fused pieces that make up the finished work.
The design of the panel is modern, consisting of a large cross with the word RESPECT in relief down its central bar and surrounded by the individual pieces of the children’s work. RESPECT forms the core of St Mary’s curriculum and represents Responsibility, Excellence, Sprituality, Partnership, Enjoyment, Caring and Tolerance.

Once fired the glass was taken to York to be leaded up by Barley Studio, then Master Glazier of Ely Cathedral, before being installed in the school foyer where it remains today.

In 2003 with funding from the St James’ Place Foundation, the Museum created a sensory garden for a local special school and commissioned glass artist, Chris Woods, to create light effects within it.